Few things in sports are more impressive than monster slam dunks. Although it’s only worth two points like a layup, there’s no denying the cool factor. A commanding dunk also has the power to get the crowd amped up, deflate your opponent’s ego, and turn the momentum of a game. Yet, dunking a basketball is a skill a multitude of players take for granted.

If throwing one down piques your interest, there’s no reason you can’t work towards this goal. Perhaps you can grab the rim on a good day, or you’re frustratingly close but not quite there. Whatever the case may be, you’ve come to the right place. In this guide, you’ll learn how to dunk a basketball and become a better well-rounded athlete. Read on!

Dunking Off One Foot

It’s typically the go-to technique for a myriad of athletes because it’s the simplest way to dunk. When dunking with one foot, the movements are closely similar to those of a layup, making it a breeze for experienced basketball players to learn. Single-foot dunkers are usually lanky and tall with a build that resembles field and track high-jumpers.

A one-foot dunk marker is a longer than usual last step, typically referred to as a penultimate step by professional trainers, lowers a jumper’s center of gravity. It’s then followed by an explosive and quick takeoff where their jumping leg slightly bends to become a lever that transforms speed to height.

Below are the perks of how to dunk off one foot:

The drawbacks of one-foot dunks are as follows: 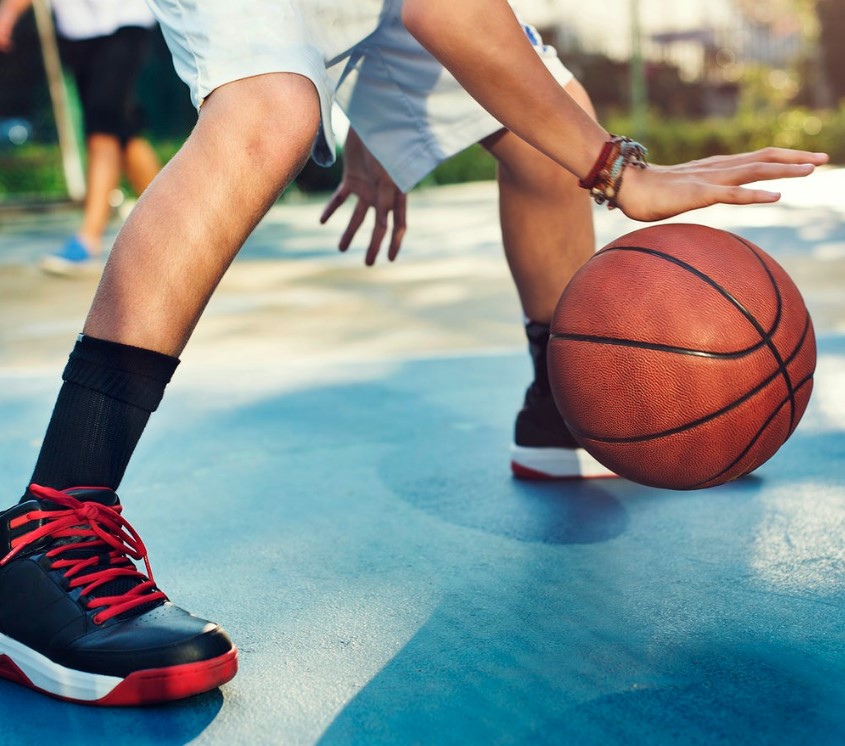 How to Dunk Off Two Feet

It’s a dunking technique that divides basketball players. While some naturally pick it up, for other athletes, it’s an uphill battle. Dunking off two feet is a challenge for most players; it delivers the potential for some of the most jaw-dropping and powerful dunks. Muscular athletes gravitate towards two-foot dunks because the jumps depend less on ‘bounce’ and quickness and more on sheer strength.

These dunkers are typically excellent squatters and can jump astronomically high from a stationary position. To perform a two-foot dunk, bend your knees deeply and focus more on the ground, loading your jump.

Doing so increases the time during takeoff as it allows you to channel force into the ground, ushering in height elevation. This approach makes it more challenging to convert speed into jump height and less useful than single-foot dunks.

Below are the benefits of learning how to dunk with both feet:

Dunking with two feet has the following disadvantages:

How to Dunk: Alley-Oops

These are soaring in popularity among athletes trying to dunk for the first time because they can focus on their jumps without worrying about dribbling the ball. The ability to swing your arms for increased momentum is make-or-break between a successful and failed dunk.

It’s worth noting that with alley-oops, timing can be a challenge. If they’re not 100% perfect, they become harder as opposed to easier.

The perks of alley-oops are:

The only setback of alley-oops is:

Which Is Better: Two-Foot vs. One-Foot Jumping

If learning how to dunk is your priority as an athlete, selecting the jump technique that allows you to reach the highest vertical is crucial. You’re probably at odds as to the better option between jumping higher off one foot or both feet. The solution to this dilemma is based on the following factors.

One foot jumps are marked by short ground contact time. A world-class jumper touches the ground for 0.12 seconds (120 milliseconds) during takeoff, ushering in significantly powerful forces that propel upward motion in a heartbeat.

It’s a no-brainer that these forces increase linearly with greater body weight. Therefore, an Olympic high-jumper has more build than a marathon runner and less like a professional footballer.

With each unnecessary pound adding to the forces during takeoff, it’s no surprise that at some point, the tendons and muscles lack sufficient strength to support your entire body weight. If you’re a lanky and lean basketball player, then one-foot jumping is right up your alley. If not, two-foot jumps are a better fit for you.

It’s no secret that a two-foot jumper spends more time on the ground during takeoff than a one-foot dunker. As a result, they produce immense force through their glutes, hips, quads, and calves.

Although one-foot jumpers heavily depend on ‘bounciness’ and elasticity as their saving grace, two-foot jumping relies more on power and strength. For this reason, professional footballers are incredible two-foot jumpers, courtesy of their strong lower bodies. With that being said, if you’re muscular, then two-foot jumping is perfect for you.

Given that leg jumping relies on muscle and tendon elasticity coupled with high impact forces, it’s most suitable for young athletes. With increasing age, muscles and tendons lose their springiness and elasticity, ushering in the likelihood of sustaining injuries. It’s for this reason, a multitude of basketball players start relying more on two-foot jumping as they get older.

More often than not, winners of Olympic high jumping contests are usually below 30 in age. Therefore, if you’re over 30, it’s advisable to focus on two-foot jumps that usher in less likelihood of injury and increased chances of improvement.

More often than not, basketball players use one-leg jumps because it’s equally as much of a natural movement as layups. Contrarily, volleyball players typically rely on two-foot jumps because they’re the most common way of jumping when trying to spike or block.

If you’re armed with all the suppositions you need to be an excellent two-foot jumper, but can hardly get off the ground, then technique could be amiss. Try working on two-foot jumps, and you’ll notice improvement quite soon as your body adapts to the new technique. It’s like working on your off-hand dribbles. They’re challenging at first but get easier quickly. 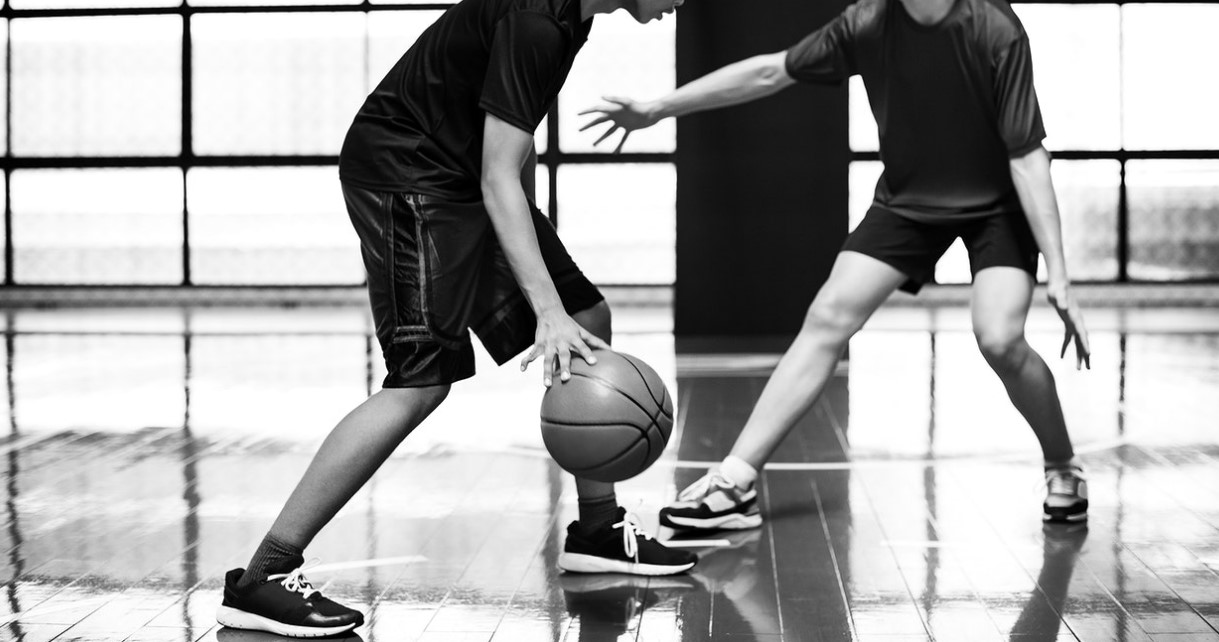 Once you learn how to dunk a basketball and become a pro with immense practice, you’ll be feeling your oats. Here are a few things to keep in mind that will save you severe injury and embarrassment.

Be Cautious Where You Dunk

Depending on where you’re playing, the rim may be a wreck. You can sustain severe hand injuries if you dunk on a rusted rim that is poorly maintained.

Going viral on YouTube for embarrassing yourself on the basketball court or going to the hospital after sustaining injuries is the last thing you need. You don’t have to resign yourself to this fate. Don’t practice on portable rims as they’re susceptible to tipping over when even the slightest weight is put on them.

Hanging on the rim is allowed in a basketball game as a protection measure for you and other players on the court. If not, you’ll get a technical foul for the foolery. Additionally, it also jeopardizes your safety if you do it incorrectly, as you may lose your balance and fall flat on your back.

Exercises That Make It Easier To Learn How to Dunk

Skipping rope is an incredibly well-rounded exercise for most athletes, including basketball players. It aids in the development of agility and quick feet. It’s also remarkable for cardiovascular conditioning, helping to boost your vertical leap.

As with everything else, practice makes perfect. Therefore, with improvement, you can incorporate double-skipping jumps and one-legged jumps to switch things up. Consistent jumping reps will have your calves screaming, more so if you do skip rope after an intense strength training session.

With advanced plyometric workouts, you’re well on your way to becoming a spectacular dunker. They include box hops that entail an athlete jumping back and forth over a hurdle or a box of a specific height and depth jumps where you drop to the floor from elevated platforms and leap back on.

Slam dunks are amazing plays that only a fraction of basketball players can do, adding to the allure of it. If you’re right on the dunk’s doorstep, keep at it with unwavering confidence, and remember practice makes perfect. It’ll pay off in the end.